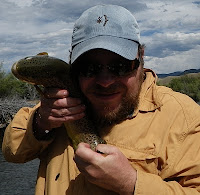 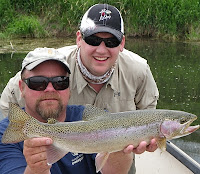 OK. My good friends Todd and Jake were out for a few days and we fished hard. Both fellows took their largest trout ever and one day on the Mo' was rather epic. We only boated 18 or so trou, but 8 of them were over 20". Not bad for a couple of corn-dog eatin' Minnesotans. We did have a slow day but this was due to a very cold night prior. Hey, I can't control the weather. At least we caught some big fish and Jake met the woman of his dreams in the bar in Cascade. Way to go Jake.
The hopper fishing should be good well into late sept. Thus far, we have had some awesome days. For those of you who had a taste of it in '09, there is still time. We have plenty of water and that should make for some great Baetis fishing later on. With any luck we will have a mild October vs. the arctic paradise we had last year.

We are booking for skwalas so if you want prime dates with the best guides, you need to do it sooner rather than later. Just an F.Y.I.
The schedule is hectic. The fishing is good. Hopper madness! Predator
Posted by Eric at Renegade Fly Fishing Outfitters at 8:37 AM