Missoula Fly Fishing, Cold hands and too many cigars! 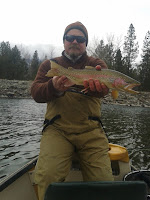 We fished the Bitterroot River yesterday. I think we all need to remember that it is way early in the skwala season. So here's the straight poop:
We did catch a number of very nice trout. Were there Skwalas? Nope. We saw some smaller stones and the midge hatch was strong. The fish were up midging in the right spots, but they were tricky. There was a reasonable streamer bite but which was surprising considering that the h2o was really cold. This dingbat broke off a dandy on the hookset, but I eventually settled in and nailed some nice ones.
We took plenty of trout on larger stone nymphs. The whities seem to have thinned out.  I think that fish have begun to spread out a little bit. We took fish in spots that were barren a week ago.  TJ was behind us somewhere, trapped in that amazing rainstorm. I hope he made it through. 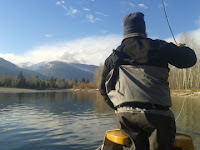 When the sun popped out it was downright pleasant. This shot was taken just before all hell broke loose. Fly fishing in Montana is always dicey in the spring, but the pay-offs are worth it.

To my fishing partners from yesterday: Don't let me smoke that many cigars again. I awoke to a stuffy nose and a sore throat. 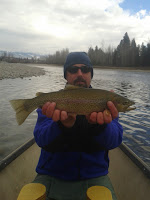 A nice Bitterroot River rainbow.  Missoula is the place to be.


Posted by Eric at Renegade Fly Fishing Outfitters at 10:57 AM