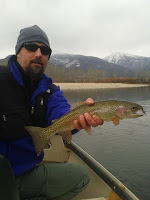 Here's latest fly fishing report from here in Missoula, Montana.
Bitterroot River: Yeah, there are a few skwalas out. You will see more boats than bugs. The water is very low (buy your gel coat stuff in bulk)  and most of the fish are still lurking around their winter lies. They will eat a dry but it's spotty and you better make sure you present it right. No sloppy=more fishy! Since most of the fishermen out right now are guides waiting to work, that shouldn't be too tough. Should it?
To say the fishing is good would be inaccurate. It ain't bad. Let's leave it at that.
CONTACT US 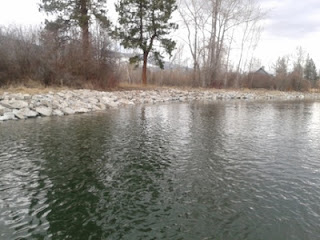 Ever wonder why the Bitterroot seems to be getting filled in with gravel more and more? Is getting a 3-10 permit as simple as it seems? In the Bitterroot Valley, I would say YES! The project below Stevensville is only the latest in a long list of recent "stabilization" projects. If a guy builds a structure in the floodplain/floodway, he should assume responsibility for his actions!  Have a look at this if you want to know a little more about what's happening. Maybe it's time to question this practice in the Bitterroot Valley.


Posted by Eric at Renegade Fly Fishing Outfitters at 12:07 PM